ANNAPOLIS, MD — Today, a group of 25 prominent advocacy and community organizations delivered a letter to Governor Larry Hogan and the Maryland Department of Environment calling for a drastic improvement to the state’s draft climate plan. The groups expressed that the Maryland Dept. of the Environment (MDE) is “failing to respond to the urgency of the climate crisis.”

The letter is signed by a wide array of organizations, including large environmental groups like Chesapeake Climate Action Network, 350.org, Sierra Club, and Maryland League of Conservation Voters; faith organizations like Interfaith Power & Light and Unitarian Universalist Legislative Committee of Maryland; student-led movements like Sunrise Movement Howard County  and community organizations like EcoLatinos, Maryland Legislative Coalition, and League of Women Voters of Maryland, to name a few. The letter states:

“Unfortunately, the plan fails to put us on track to meet mid-century targets identified by the world’s leading climate scientists as necessary to avoid the worst of climate disruption, and provides no clear policy specifics on how to achieve goals. As an example, the proposed ‘Clean and Renewable Energy Standard’ (CARES) is very thin on details, has been developed with minimal public input, and continues to rely on the burning of fossil fuels which are neither clean nor renewable.”

The Greenhouse Gas Reduction Act of 2016 — which was passed by an overwhelming majority in the General Assembly and signed into law by Governor Larry Hogan —  requires MDE to reduce greenhouse gas emissions 40 percent below 2006 levels by 2030, and for MDE to develop this plan by the end of 2018. In October of 2019, Gov. Hogan’s Department of Environment finally released its draft plan — nearly ten months after it was due. This came two weeks after 26 advocacy organizations sent a letter to the agency expressing “deep concern” that they had not yet released its legally mandated plan.

Today’s letter follows a recent policy review which found that Gov. Hogan’s draft Greenhouse Gas Reduction Plan is critically flawed and falls far short of what is needed to address the climate crisis.

The CCS report found that the MDE plan uses “unrealistic assumptions on widespread electric vehicle adoption, dubious claims that highway widening will result in fewer emissions” and “MDE does not account for methane leakage in inventories or future scenarios, even as the Hogan Administration is supporting an expansion of fracked-gas infrastructure.” See the full report at this link.

In the letter released today, the coalition of advocacy groups called for a stronger plan that “looks at the entirety of the greenhouse gas problems our state is experiencing from every major source—not just energy usage.”

“We must address energy production, transportation, agriculture, and housing as well as reduction strategies such as forestation and sequestration,” they added.

MDE is now soliciting public comment on its draft Greenhouse Gas Reduction Act Plan through a series of community forums across the state. 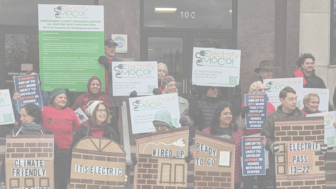