“Governor Terry McAuliffe announced today that he has committed the Commonwealth to an ‘alliance’ with 12 other states to move forward on the principles of the Paris Climate Agreement in the wake of President Trump’s withdrawal from the accord. However, Gov. McAuliffe’s announcement will forever ring hollow as long as he continues to support Trump’s plans to build two massive fracked-gas pipelines through Virginia and to drill for oil off of Virginia’s fragile coastline. The Governor’s commitment to fracking and offshore oil will — if realized — cause Virginia to dramatically INCREASE greenhouse gas emissions in coming years, a total violation of the principles of the Paris Agreement. It is, frankly, hypocrisy for the Governor to support both Paris and violent drilling for oil and gas in and across the state. The best thing Gov. McAuliffe could do to support Paris and oppose Trump is to drop his tragic support for offshore oil drilling and for the Mountain Valley and Atlantic Coast Pipelines for fracked gas.”

Photo at the top from Flickr user Edward Kimmel with a Creative Commons license. 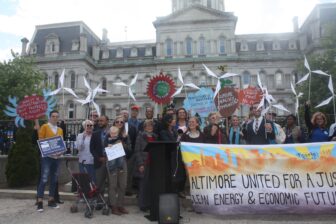 Congratulations to Baltimore for Divesting from Fossil Fuels