On September 17th, I had the great opportunity of joining a “Power Women” tour of the Block Island wind farm in Rhode Island, the nation’s only offshore wind farm. Organized by the National Wildlife Federation and Women of Renewable Industries and Sustainable Energy, the tour brought together women working in clean energy advocacy and in the industry itself. I traveled from Maryland with my colleagues Jennifer Kunze from Clean Water Action, Laqeisha Greene from United Workers, and Leah Kelly with the Environmental Integrity Project to join the tour.

As we work with our local partners to bring offshore wind to Maryland, we can learn a lot from the U.S.’s only offshore wind farm off of Block Island. The wind farm was built by Deepwater Wind and came online in December 2016. It’s a small project, made up of just five 6-megawatt turbines. But those five turbines are enough to power 17,000 homes both on Block Island and on the mainland with clean, renewable energy. Prior to the wind farm, Block Island’s 300 residents received their power from diesel generators. When the turbines were installed, Deepwater built a submarine cable that connected Block Island to the mainland electric grid for the first time, and the island was able to turn off those diesel generators. As Aileen Kenney of Deepwater Wind remarked on the tour, “It’s a small symbol of how renewable energy will replace some of those dirtier older fuels.”

The project is 16 miles off of the mainland, so it took a while to get out there. While there have been some concerns in Maryland about how visible offshore wind turbines will be from the shore, I struggled to see them for most of our boat ride. Then they slowly began to appear on the horizon, cropping up on the horizon in their slow-moving elegance. Once we approached the turbines, we cruised around them and heard from local elected officials, technical experts from Deepwater Wind and GE, and advocates who were instrumental in bringing this project online.

Once we reached the turbines, elected officials from Rhode Island and Massachusetts engaged in competitive banter about who is going to install the most megawatts of offshore wind power. Rep. Pat Haddad from Massachusetts got a lot of laughs when she commented, “I used to be the queen of coal. Now I’m the witch of wind.”
I chatted with Janet Coit, director of Rhode Island’s Department of Environmental Management, on the boat, and she shared more insights into the project’s local reception. I mentioned some of the concerns that I’ve heard in Maryland, particularly about how offshore wind could potentially impact tourism. Ms. Coit spoke about how the turbines off of Block Island have actually become a tourist destination themselves. And as an island that is largely dependent upon tourism, the additional reason to visit has been a boon. While there was some initial hesitation from a few folks on the island who were worried about impacts to the pristine view of the ocean, she said that most people have come around: “it’s just like how people get used to utility lines, it’s part of the viewshed and it’s actually cool, like Block Island is celebrating that it’s green.”

Aileen Kenney, Senior Vice President of Development at Deepwater Wind, shared a lot of information about the project including its economic benefits, the company’s engagement with local communities, and various precautions to protect wildlife. She said that the Block Island project generated 300 construction jobs and noted that when she goes to public meetings about offshore wind, “you don’t even hear about the climate benefits anymore because people are really focusing in on the port improvement, the jobs, what is it going to mean for people going back to work in ports, and the whole manufacturing side of it.” Coming from Baltimore where we stand to gain port improvements and local manufacturing jobs from Maryland’s proposed wind farms, I can attest to this deep interest in the economic opportunities presented by offshore wind.

Ms. Kenney also pointed out an avian radar unit that was installed in collaboration with the U.S. Fish & Wildlife Service that allows the agency to track endangered species when they’re flying across Rhode Island Sound. And she spoke about efforts to minimize the impacts from pile driving, which causes noise that can be disruptive to marine mammals and sea turtles. To protect local wildlife, particularly the critically endangered North Atlantic Right Whale from the construction noise, conservation groups helped develop an agreement to limit the time of year that pile driving could occur. And when pile driving did take place, Ms. Kenney described how “teams of protected species observers on vessels patroll[ed] around, looking for marine mammals and shutting down construction activity when they were in certain zones.”

While no development project is going to have zero impacts to the local community and environment, the team of people who brought the Block Island wind farm to completion seemed genuinely committed to addressing concerns and working in collaboration to build the best possible project. As we headed back to shore, I spoke with Ms. Kenney and Joy Weber from Deepwater to learn more about what their plans are for Maryland. Their proposed wind farm in Maryland will be much bigger than the one off Block Island, generating 120 MW of energy and creating 913 direct and 484 indirect jobs. I asked what type of jobs they expect the project to create and what types of transferable skills will be useful for people hoping to work on the project. Ms. Kenney said that the Block Island project employed “welders, painters, electricians,” and noted that “welding is welding. It’s a transferable skill if you’re a qualified welder, so the weld on that [pointing to a turbine] is a very transferable skill.” Then there are the maintenance and operating jobs after the projects are built.

Ms. Weber remarked that as the industry gets off the ground, “there’s going to be a lot of partnering [with] companies that have done this before and maybe from out of state that come in and partner with Maryland companies that are interested in getting involved.” As Maryland’s Public Service Commission emphasized when they approved both Deepwater’s project as well as U.S. Wind’s project last year, Maryland has an exciting opportunity to lead the offshore wind industry on the East Coast. Ms. Kenney spoke of this potential: “there’s not just a project, there’s an industry that will mean long-term, sustainable jobs as well.”
We also chatted about how to overcome some of the lingering opposition and concerns in Maryland, mostly around the appearance of the wind turbines. Ms. Weber predicted, “I think that understandably there’s concern about changing anything. But I think that people are going to be okay once they see how you can barely see them.”
Indeed, as our boat got closer to shore, the turbines disappeared from view once again. But I was sad to see them go. Rather than obstructing a pristine ocean view, I think the turbines are beautiful symbols of our clean energy future.

Check out a video from the tour below!

Want to bring offshore wind to Maryland? Sign this petition to the Bureau of Ocean Energy Management urging them to approve offshore wind in our state! 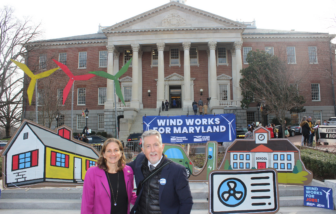